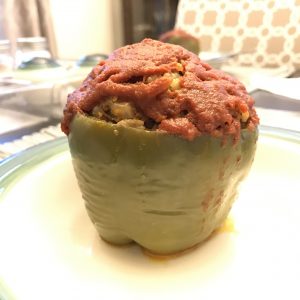 This recipe is all about using up LEFTOVERS. I don’t mean the extra serving from the Crock Pot Celery and Leek Soup you made over this cold weekend so you can have a delicious hot lunch to start the week, or the corner pieces of Crock Pot Vegetarian Lasagna that you purposefully didn’t scoop out so you could nibble on the cheesy goodness again after the kids are in bed, I mean the small containers of random single ingredients that you can’t bring yourself to throw out.  Stuffed peppers are the perfect solution to this ongoing drama of being single. Ingredient, that is.

I did make lasagna last week and didn’t have a chance to make homemade sauce, so I bough (gasp!) a big jar of chunky spaghetti sauce. I also rolled sushi and had one sad bowl of white rice left. So I stopped by the store and picked up a few fresh peppers– because even though it was a separate trip, I rationalized that I was actually doing a service by cleaning out the fridge.

DISCLAIMER: this next statement is not political, religious, or meant to have any greater meaning in life. I don’t really believe in gender… of bell peppers. That’s right, there’s a myth that you can judge the gender of a pepper based on the number of bumps on the bottom of the bell. Male peppers are a tripod with three bumps and females are more voluptuous and display four proud bumps instead. Farmers and cooks have tried to determine if there is a taste variety, increase or decrease in the number of seeds, or what causality actually exists to determine the gender, but I have yet to see scientific proof on this topic. Lack of proof does not discourage me from believing that once again, we can say that size does matter and so do the number of bumps. I think they are called male and female just as an easy way to differentiate, but that there isn’t actually a gender connection to the bells, since they grow the same seeds and reproduce in the same way.

I prefer to use the female, four bump variety, when I make stuffed peppers for no greater meaning than I think they stand up easier in the crock pot. If you are going to cut them in half before stuffing, then it doesn’t really make a difference, but I like to stuff my peppers whole. When they start to get soft, the three bump chumps tend to tippy over and the contents and liquids spill out.  So if you can, try to find full, robust “females” to stuff with your meaty goodness. (I HAVE A FEELING THAT I SHOULD REPEAT THAT DISCLAIMER AGAIN HERE, YOU NAUGHTY LITTLE READERS.)

A normal serving would be one full pepper, but I like to make three peppers and then a few extra meatballs. That’s right… I turn my leftovers into leftovers. Sometimes, the kids just prefer the meatballs to the peppers and that’s fine with me, too. My oldest son tells me he doesn’t like peppers or onions, but doesn’t realize they are already chopped up and cooked in the meatball. He tells me that dinner was “so good” in the same voice that my nana used to say those words. And then she would suck in air, like it was grabbing up the last morsel of goodness from that bite.

3 green bell peppers, with four bumps on the bottom

Cut top inch off each bell pepper and scoop out the seeds and pithy parts. Cut the green parts off the top part and finely chop. Mix beef, chopped pepper and onion, seasonings, rice, and tomato paste. Stand peppers up in the crock pot and using your hand, gently fill each pepper pot with meat. Push mixture into the sides so that air is removed and maximum capacity is reached. Use any remaining mixture to make meatballs; place them in the crock pot surrounding the peppers. Pour marinara sauce over the stuffed peppers and meatballs. Cook on low for 5 hours. Serve immediately (overcooked peppers will fall apart and lose all remaining texture). 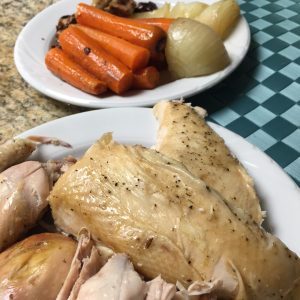 Hello from South Carolina! This is my first post since relocating to Hilton Head Island and I’m so glad to have my crock pot unpacked and start getting settled in. I don’t know about you, but after eating out for days on end, we start to miss our favorites dishes.

Nothing warms my heart more than hearing my kids ask me to make specific meals. Our first meals when my kitchen “re-opened”? My youngest asked for pasta carbonara (because it’s a good belief in life that bacon makes everything better!). My oldest asked for taco night; hard and soft tortillas are a requirement– it needs to be both or none at all.

But then I got to pick! I wanted something easy to make and easy to clean up. So of course I used my crock pot! 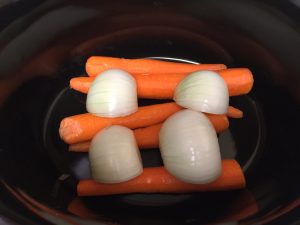 Use root vegetables to make an “edible trivet” in the crock pot.

This recipe seriously only has four ingredients. And after a day of low and slow cooking, you can serve a whole freaking chicken.  If you’d like to play with the flavors, try using different root vegetables as the “edible trivet” or rubbing the bird with different seasonings.  By perching the bird on top of the veggies, the meat won’t be soaking in liquid while it is cooking and the drippings with flavor the meat with all the delicious goodness.

Other recipes recommend rubbing the skin with oil or butter, like you would if you baked the chicken in the oven, but I disagree. The skin is not going to really crisp in the crock pot, so the added calories of the lube are really not necessary.

When you try this recipe at home, please post it to the Dinner Is A Crock Facebook page and let us know how you tweaked the recipe to make it your own!

Rinse the chicken inside and out with cold water and then pat dry with paper towels. Shake the Mrs. Dash seasonings on the outside of the chicken and also on the inside. Wash your hands. Arrange the carrots on the bottom of the crock pot like you are making an edible trivet. Then add the onions as additional perches. Place the bird on top of the vegetables and make sure the lid sits comfortably on top of the crock pot. If the lid doesn’t sit flat, adjust the veggies under the bird until it fits better. Be cautious as you reconfigure the lid and the contents so that you are not contaminating the handles with raw chicken juices. Cook on low for 6-8 hours. Remove bird carefully and carve. The vegetables also make a delicious side dish!

Summer Series: Dinner Is A Crock Heads To The Coast!

We are going on vacation! I am so excited to take you (and my crock pots) to the beach to enjoy some sunshine, crashing waves, relaxation and of course, delicious food. We have rented this amazing beach house located in Avon, North Carolina. Avon is part of the Outer Banks, known for it’s quiet beaches, beautiful dunes, local seafood, and tons of adventures.

And away we go!! I’ve got my laptop and crockpots and a couple bathing suits.

What else could I need?! 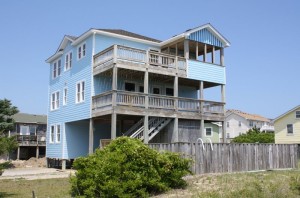 Home, sweet home– at least for this trip!

Welcome to Ooh La La, our home for the next week. The house has recently been renovated and between the spacious bedrooms, totally updated kitchen, swimming pool and decks off every level, I’m pretty sure this is heaven. Or on the top deck, it certainly feels close! YOU can also vacation here, Ooh La La is listed on VRBO.COM and since it’s just renovated, you can still get here this summer or fall! Honestly, you’re best off booking this summer if you want to come next summer.  I’m already starting to think about when we can come back… and we’ve only been here a few hours! It’s that awesome! We’ve got three adults and three kids here this week, but the house could easily handle 8-10 people. We are three houses from public beach access, a mile from the Avon Pier, and any store you need is off the main road in the next couple miles.

If you’ve learned anything from me yet, you have realized I’m a planner. Slightly crazy. Not quite neurotic. But a great plan makes for a easy adventure. So first things first, I planned our meals. I want to have as much fun at the beach as possible, so I didn’t want to worry about what to cook and I also didn’t want to eat all of our meals out (that gets expensive!!). Once I planned our meals, I made lists– what to bring from home, what to get at the grocery store upon arrival, and then what kind of local/regional fare I wanted to get from seafood markets and farmers markets. I know it seems like a lot of work, but when I get there, the only thing I want to run out to get more of is sunscreen and beer!

Here is my MEAL PLAN and GROCERY LISTS. (Click on the CAPPED words to open documents.) Think about adapting this for yourself when you go on a trip– what would make for easy breakfasts and lunches… where will you eat lunches? Will you eat them all together or on separate timelines? Can everyone get back together for dinner each night or how many of the nights? Does anyone have a good allergy to be aware of?! You can simplify your crazy by answering these easy questions and then bringing all your basics. Also– think about those basic items like condiments, cooking oils, seasonings, etc. You certainly don’t want to buy brand new ones of everything when you get to your destination unless you really need to do that. Just like you know you need towels and sheets, pack what you can to make settling into your destination as easy a transition as possible. 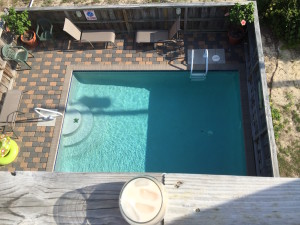 Our beach house for the week has a pool!

And that little bit of prep work will make for an easy week. I can’t wait to share it all with you– check out Dinner Is A Crock on Facebook and Instagram for more pictures and stories! We just arrived and I’m already chilled… just like my drink. Cheers!

(What am I drinking?! It’s a combination of Fire Eater and Rumchata! Two liquors that when combine on ice make a tasty beverage that resembles Cinnamon Toast Crunch cereal. Go ahead and try it, you’ll thank me later!)