I have a real problem with breasts. Even when they are big and juicy, I just don’t like them.

Haha, now that I have your attention, let me explain. I’m not really a fan of boneless, skinless chicken breasts. I know that they are healthy and lean and great protein, but I just don’t love the texture or the challenge of cooking them. When we grill them, I always feel like they get too done on the outside to make sure that they are cooked all the way through.  In the oven, they just have too much of a tendency to dry out. So of course– I cook mine in the crock pot so that they stay moist and soft.

I thawed out a package of four chicken breasts and after staring at them for three days in the refrigerator, I knew I either had to cook them or throw them out. So here’s what I did…. I cooked them, I shredded them, I covered them in hot sauce and I served them on a bun with some cheese and ranch dressing. THERE WERE NO LEFTOVERS!!! It worked! I like (chicken) breasts!

I used a bottle of Ken’s Steakhouse Buffalo Wing Sauce on my chicken, but if you’d rather have barbeque 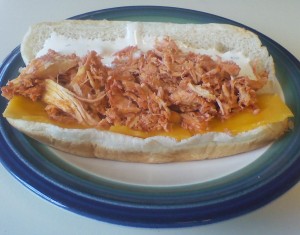 sauce or even something sweet like teriyaki, it would work well for this recipe.  We really like chicken wings at restaurants, but it makes such a mess to fry them at home– this recipe gives the flavor without the mess or the fat.  When you cook the chicken in the apple juice, it gives it a little extra zing and then the sauce just saturates the meat with flavor. Enjoy!!

(hot dogs buns, cheddar cheese, ranch dressing… and celery sticks on the side, of course!)

Put chicken breasts in crock pot, then pour apple juice in. Cook on high for three hours. Use a baster to remove the excess liquid, then using two forks or a fork and a knife, shred the meat in the crock pot. Pour sauce in next and stir until all meat is coated. It’s hard to say exactly how many ounces of sauce because it depends on how much meat you used. But add a little sauce at a time until you have enough, but the meat isn’t swimming. Cook for one more hour on low. Serve meat on a hot dog bun with cheese and ranch (or blue cheese) dressing. 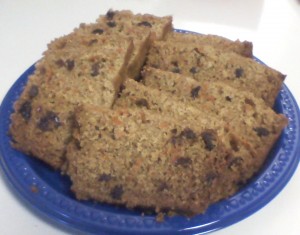 I would like to begin this post with an argument. The title of carrot cake is really a misnomer. This shouldn’t be considered a dessert. It is based foremost on a VEGETABLE for goodness sake! It is a carbohydrate next and then a treat after that. It is vegetarian, kosher, can be low fat and I’d almost put the gold sticker of “healthy” on it!

Based on these clear and evident facts, I would like to share with you my recipe for crock pot carrot cake. Serve it for breakfast, after lunch, for an afternoon or evening snack or just about any point of the day. Chalk it up as doing a good deed for yourself. And trust me, this tastes soooo much better than drinking v8!

Mix all ingredients in a separate mixing bowl by hand. Coat a loaf pan with non-stick spray and then pour batter in. Place entire loaf pan in crock pot (use oval shaped crock pot to make it fit). Cook on high until center of cake is no longer jiggly– about 2-2.5 hours. Let cool and then shmear with whipped cream cheese or cream cheese frosting.

Let’s make a play list for today’s recipe to put you in the mood! By the time you sing along to Sweet Home Alabama(Lynyrd Skynyrd), Little Bitty (Alan Jackson) and the beginning of Sweet Caroline (Neil Diamond), you’ll have a pot full of home cookin’ set for a down-home country feast.  Whether you live in the north, south, east or west, you’ll enjoy this soothingly savory dish that goes great with any variety of side dishes. I’ll be serving mine with steamed broccoli and maybe some scalloped potatoes. If I can figure out how to do the potatoes in the crock pot, you’ll see it posted later this week!

Once your meal is made, add some more songs to your play list so you can dance around and sing when you are doing the dinner dishes later tonight. Enjoy!

Spray pot with non-stick spray. Place country ribs side by side in one layer (best if using an oval shaped crock pot). Mix remaining ingredients in a separate bowl and then pour on top of meat. Cook on low for 6-8 hours.